Skip to main content Skip to navigation
Back to top anchor

Based on the submissions from the parties involved this complaint was found within TDR jurisdiction. The TDR Scheme Adjudicator identified:

“This dispute centres around a mobile phone that has been assessed as damaged from liquid ingress. There is a dispute between the parties as to whether the good (the handset) would comply with the guarantees under the Consumer Guarantees Act (CGA), and how it would sit within the warrantee. This is a complaint that TDR can consider.” 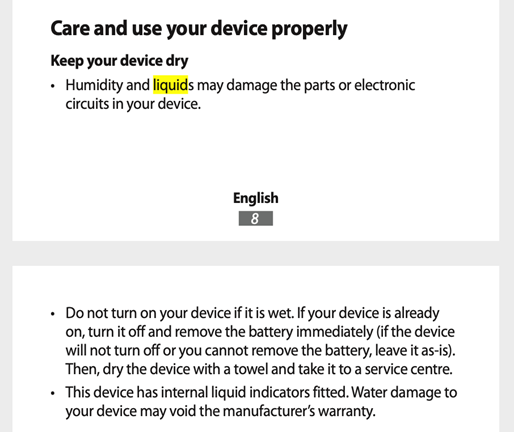 Misleading conduct in relation to goods

No person shall, in trade, engage in conduct that is liable to mislead the public as to the nature, manufacturing process, characteristics, suitability for a purpose, or quantity of goods.

(1) For the purposes of section 6, goods are of acceptable quality if they are as—

(a) fit for all the purposes for which goods of the type in question are commonly supplied; and

(b) acceptable in appearance and finish; and

(c) free from minor defects; and

(e) durable,—as a reasonable consumer fully acquainted with the state and condition of the goods, including any hidden defects, would regard as acceptable, having regard to—

(f) the nature of the goods:

(g) the price (where relevant):

(h) any statements made about the goods on any packaging or label on the goods:

(i) any representation made about the goods by the supplier or the manufacturer:

(j) all other relevant circumstances of the supply of the goods.

(a) the goods have been used in a manner, or to an extent which is inconsistent with the manner or extent of use that a reasonable consumer would expect to obtain from the goods; and

(b) the goods would have complied with the guarantee of acceptable quality if they had not been used in that manner or to that extent.

[i] TDR notes that mobiles have varying degrees of water resistance based on their IP (Ingress Protection) rating. As such, no handset is guaranteed to be 100% moisture proof.